On this day in 1957, while spending the Christmas holidays at Graceland, rock-and-roll star Elvis Presley received his draft notice for the United States Army. Here are five shocking facts about the "King of Rock and Roll"...

Elvis Was Drafted at the Height of His Career While at the top of his career and shortly after buying his mansion, Graceland, Presley got his draft notice in the mail. Although fans wrote the army in the tens of thousands, asking that he be excused from service, Presley wanted to serve. He did receive one deferment while he was finishing up King Creole. However, he was sworn into the army as a private on March 24, 1958, in Memphis.

He Helped Increase the Number of Polio Vaccinations 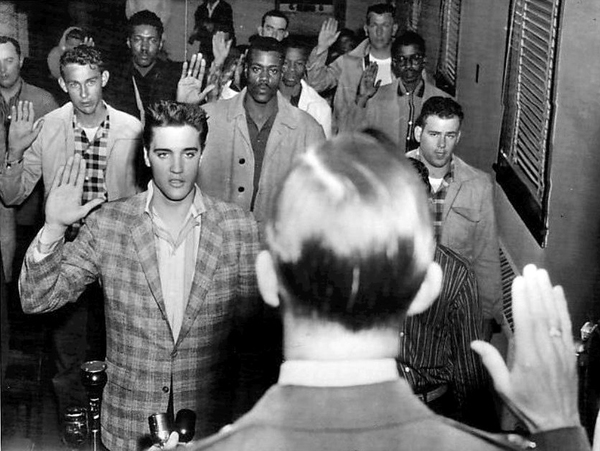 The rock and roll singer turned out to be a great role model for young people in America. Although vaccination rates were high for younger children in the 1950s, they were low for teenagers, so Elvis supported the vaccination push by appearing on national television and getting his shot. The vaccination rates shot up to 85 percent from two percent by the time Elvis left the Army on March 2, 1960.

Fifteen of the Songs Elvis Recorded Contained the Word “Blue" ”“Blue Suede Shoes,” “Blue Hawaii” and “Blue Christmas” are probably the best well-known of Elvis’s blue songs, but there were 12 others, and no one seems to know why he was attracted to songs that contained this word. Other songs that Elvis recorded containing the word “blue” are “Milkcow Blues Boogie,” “G.I. Blues” and “Blue Eyes Crying in the Rain.” One interesting thing about the King of Rock and Roll is that he never wrote any of the songs he recorded.

Presley Was a Germophobe The King of Rock and Roll, according to his wife, was a germaphobe and went out of his way to ensure he was safe from germs wherever he went. When he dined at the homes of other people, he went so far as to bring along his own silverware. In addition, when handed a drink, he would turn it around and drink from a cup next to the handle because he thought no one else ever did that.

Presley Liked to Pretend to Be a Policeman Famous people can sometimes get away with things that ordinary folks can’t. One of the things Presley liked to do was pretend to be a member of law enforcement. He would stick a police siren on his car and pull over drivers for speeding, after which he would lecture them on the dangers of speed and hand over an autograph. Elvis also often stopped by police stations late at night and on holidays to visit the officers who were serving the public. He also famously met with President Nixon to offer his services as an undercover FBI agent.