On this day in 1980, Mount St. Helens, a volcanic peak in southwestern Washington, erupted, killing 57 people. Here are 5 things you probably didn’t know about the events that led to the eruption and the dangerous consequences…

There Was Advance Warning That Mount St. Helens Would Erupt 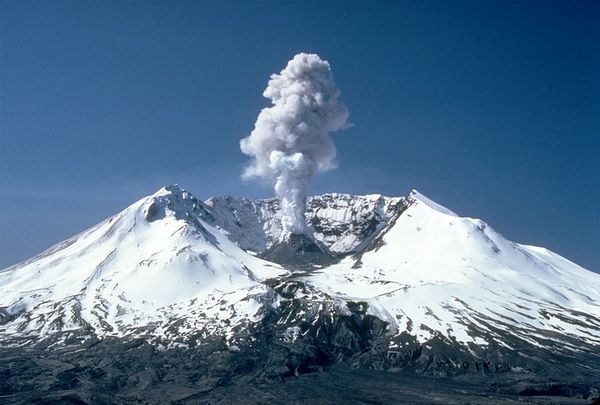 Mount St. Helens erupted in earlier years with eyewitness accounts in 1835 and again in 1842. Image credit: WikiCommons Several months before the devastating eruption of Mount St. Helens, small earthquakes began occurring, so a new seismograph system was installed by the University of Washington, particularly near the volcano. On March 20, there was a 4.2-magnitude earthquake and tremors grew steadily. The U.S. Forest Service and U.S. Geological Survey held conferences and deployed teams, which went out and placed research posts, along with taking readings and photos. It was determined that the north side of Mount St. Helens had developed a bulge that was increasing six feet each day, and it was just a matter of time before an eruption occurred.

A Landslide Set Off the Explosion

David Alexander Johnston was a volcanologist with the USGS, who first reported the eruption. Although he was six miles away, he was killed by the lateral blast. Image credit: WikiCommons Two people performing an aerial survey at the volcano spotted where a landslide had recently occurred, and seconds later, the north face of Mount Saint Helens collapsed, which released the trapped magma and superheated gases in a massive explosion. The blast wiped out everything within eight miles and leveled century-old trees for a distance of 19 miles. The direct force of the blast covered almost 230 square miles, leaving the heavily forested areas still standing but dead.

The Explosion Was Heard a Long Distance Away The blast of the volcanic explosion at Mount St. Helens was so strong that people in California, Idaho, Montana and British Columbia heard it. However, those living in closer cities such as Portland, Oregon, which is 50 miles away, heard nothing because they were inside the quiet zone. This is related to the complexity of sound waves, depending on air motion, temperature, topography and atmosphere.

The Ash Plume Was More Than 80,000 Feet High After the mountain’s summit had collapsed on its north side, a black, choking smoke and ash cloud appeared that rose high enough that people hundreds of miles away could view it. Within 15 minutes, it formed a mushroom cloud 15 miles across and more than 10,000 feet high. Because winds were strong, cities and nearby states experienced the ash fall.

The Eruption Killed 57 People Even though the area around Mount St. Helens was lightly populated, it destroyed hundreds of houses and killed around 7,000 large animals such as bears and deer. Fifty-seven people died from breathing in the ash or were buried alive. One local resident, Harry Randall Truman, was adamant about staying in his home and is assumed to have died because of the eruption, but his body was never found.