On Aug. 31, 1997, Britain's Princess Diana died in a car crash in Paris at age 36. Her boyfriend, the Egyptian-born socialite Dodi Fayed, and the driver of the car, Henri Paul, died as well. Here are 5 things you didn't know about "The People’s Princess"...

Diana Was the First Royal to Have a Non-Custom Wedding Ring. Photo credit: By John Mathew Smith - [1], CC BY-SA 2.0, https://commons.wikimedia.org/w/index.php?curid=74459899. Before Diana and Charles got married, engagement rings in the royal household were custom-made, created specifically for the person receiving the ring. Diana's ring came from a catalog; in other words, it was not custom-made, and it was common. This raised more of a stink than you'd think it was worth. The ring was beautiful, but because it wasn't a rare work of art, there were those in the household who thought it an inappropriate choice. That attitude didn't last long; the ring is now Kate Middleton's wedding ring, presented to her by Prince William, who has said it was a way to ensure Diana didn't miss out on his wedding.

Her Grandmother Was Part of the Royal Household and Central to a Family Feud. 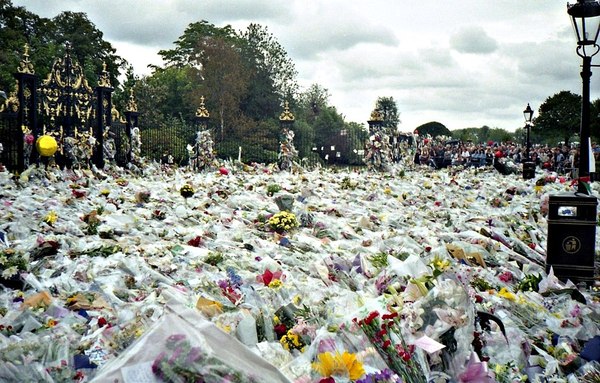 Photo credit: By Maxwell Hamilton from Greater London, England United Kingdom - Flowers for Princess Diana's Funeral, CC BY 2.0 Diana's grandmother, Lady Ruth Fermoy, used to be a lady-in-waiting to the Queen Mother. She was also the person to give key testimony against Diana's mother (Fermoy's own daughter -- not her daughter-in-law) in a custody battle when Diana was a child, and she often sided with the royal household against Diana herself when Diana and Charles divorced. Diana was quoted as saying her grandmother "has done a real hatchet job" on her mother in terms of royal reputation.

Diana Was the First Royal to Omit the "Obey" Portion of Her Wedding Vows. Wedding vows used to contain a phrase about women obeying their husbands, and even before the 1980s this phrase, understandably, had already started falling out of favor with women. Diana was the first British royal to dump the phrase, however, because one simply did not interfere with royal tradition, at least until she showed up. Diana and Charles purposefully omitted the word and brought the royals in line with most of society; Kate Middleton, Meghan Markle, and Princess Eugenie all omitted "obey" from their vows as well.

She Was Related to Humphrey Bogart. It's not that unusual to find actors related to royalty, but Diana had some rather close celeb relatives. Perhaps the most well-known is Humphrey Bogart, a seventh cousin, but she was also related to Rudolph Valentino and Lillian Gish. One of her closer relatives is actor Oliver Platt, whose great-grandmother was Diana's maternal grandfather's sister.

One of Her Favorite Movies Was Apparently the Rocky Horror Picture Show. Rocky Horror Picture Show is not a movie that you typically associate with the royal family, but now you can. Tim Curry, who played Dr. Frank N. Furter, once said that when he met Diana backstage after a theater performance, she mentioned that the film had "completed" her education and had a rather sly expression on her face.