On this day in 1814, first lady Dolley Madison saved a portrait of George Washington from being looted by British troops during the war of 1812. Here are five things you didn't know about Dolley Madison...

The Painting Was Likely a Copy, and No One Knows Where the Original Really Is. 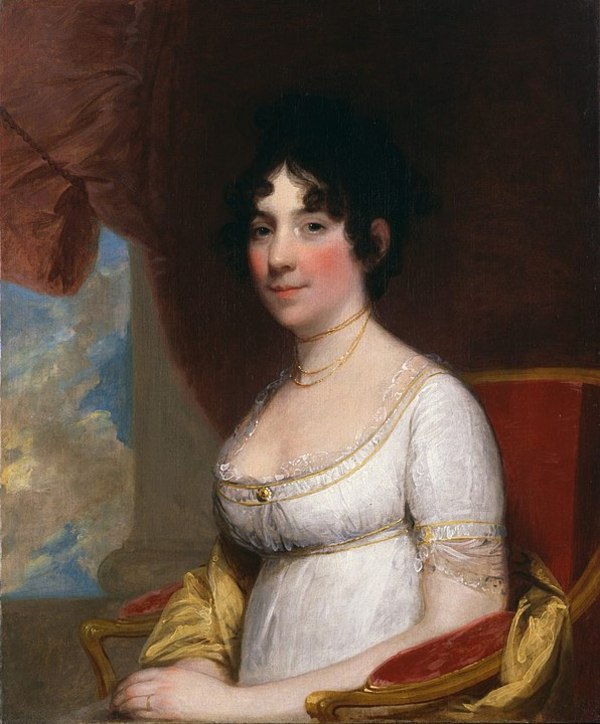 Image credit: By Gilbert Stuart - White House Historical Association [1], Public Domain, https://commons.wikimedia.org/w/index.php?curid=7758177. The portrait is officially called the Landsdowne portrait, and it turns out that there was not only an original, but also several copies. This was before printers and copiers, so those "copies" were real paintings, but they still weren't the original portrait. Officials do not know for sure if the portrait saved at the White House was the original or one of the copies, and no one seems to be able to agree. Even the artist wouldn't say whether the White House's copy was really a copy. Regardless of the originality of the painting, Dolley Madison's choice to save it was symbolic; she did not want British troops to ruin it. Given that British troops later ransacked and burned the White House, she was likely right that they would have desecrated the portrait.

Dolley Madison's Behavior and Attitude Were Among the Few Morale-Boosting Influences in the Government. Image credit: By Gilbert Stuart - http://www.nga.gov/exhibitions/2005/stuart/philadelphia.shtm, Public Domain, https://commons.wikimedia.org/w/index.php?curid=33579. While Dolley Madison had originally not wanted to be that involved in politics, and she had also been raised in a pacifist religion, she quickly became a force in the White House and openly supported fighting when necessary. In addition to her forthright support of defending the country, she was also a social whirlwind, holding gatherings meant to unify different political foes and visiting the families of members of Congress. Her goal was to get everyone as unified as possible, given the looming British threat.

Most of the Actual Work Involved in Saving the Portrait Was Done by a Slave. Dolley Madison decided to save the portrait, and she did give the order to do so. But the actual saving work was done mainly by a young slave named Paul Jennings. Jennings had to break open the wooden frame surrounding the portrait because the whole painting was nailed to the wall, and he had to cut out the painting as well. Jennings then gave the painting to two friends of the Madisons, and he fled the White House. In 1865, Jennings published a memoir in which he described his escape on that terrifying night.

The Ransacking and Burning of the White House Was a Consequence of Poor Financial Planning by Congress, Plus an Ill-Timed Favor. Years of budget cuts and budget refusals by Congress had constrained the military's ability to train troops and to grow to a healthy size. Combined with the lack of support from traditional allies the French, who were battling the British on their own across the Atlantic, that left a very meager military that found victory only in specific circumstances, namely when the targets were small or alone, such as a lone ship at sea. When the British landed 35 miles from the White House, the troops fighting them there were very ill-prepared and led by a man whose sole reason for being promoted to a leadership position was that he was the nephew of the governor of Maryland. The lack of good military strategy led to the British reaching the White House five days later.

She Actually Tried to Throw a Dinner Party While Staring Down an Invasion. Dolley Madison's attempts to keep up the spirits of everyone in Washington were usually appreciated, but she did go a little far just before the invasion: Five days after the British landed and proceeded to steamroll over some incompetent and unprepared troops, Dolley Madison decided to throw a dinner party. It was really meant to be an act of bravery, but no one showed up of course; in fact, much of Washington was evacuating. That very evening, she found herself quickly evacuating the White House along with friends, family, and staff.